WildWackySushi is just a failure. Proof is because they’re too lazy to write anymore. ⛈ ⛈ 🦊

Wish I had failure friends

raisin bread and I forgot what I was actually gonna type...

If you think you know me, post your user below and write 1 fact about me (that you didn't steal from my AJW page)

Petaya the Ring Tailed Lemur  -You used to think that you’re really nice when you host fashion shows because you sometimes make certain rounds a tie.

Scooterfrozenrabbit - The only reason you have the word ”Sushi” in your user is because you thought it was a cool nickname when you were a kid.

Nerdypiggy - I feel like I kinda stalk you on AJ...

funnytoothpaste- you used to have firestar as your pfp 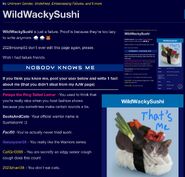 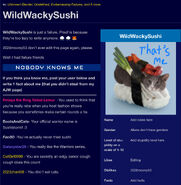 Add a photo to this gallery
Retrieved from "https://aj-failure-club.fandom.com/wiki/WildWackySushi?oldid=24238"
Community content is available under CC-BY-SA unless otherwise noted.