Leninade (Russian: Ленинад) is a soda based on lemonade made by Real Soda In Real Bottles, Ltd. The name is a portmanteau of "Lenin" and "lemonade", with the packaging having a Soviet theming.

The soda has been around since the early 2000s with the earliest signs of it around 2002. It has been described as a lemonade soda that is colored bright red or pink. It is not caffeinated and its ingredients include carbonated water, cane sugar, citric acid, gum acacia, natural and artificial flavor, glyceryl abietate and sodium benzoate.

According to The Huffington Post, the "flavor isn't really Leninade's selling point. It's the Soviet puns stamped to the bottle's label". The slogans on the bottle make fun of Soviet phraseology and propaganda, with phrases such as "A Taste Worth Standing In Line For!", "Get Hammered & Sickled!", "Drink Comrade! Drink! It's This or the Gulag!" and "War is Best Served Cold".

Katharine Shilcutt of the Houston Press described Leninade as being "like pink lemonade with just light carbonation. I really enjoyed it ... It's a light, fun summer drink to be served with a wink and enjoyed with tongue firmly planted in cheek". In a review of Leninade, Steve Tanner of BevReview said, "The bottle is a nice keepsake by itself, as the graphics are printed directly on the glass ... The bottle itself does not describe the flavor, and upon the sip, it's rather hard to place. There are elements of lemon, citrus, cherry, and grapefruit… at least that's what my tastes buds were saying. ... The non-traditional flavor profile helps it stand alone both in positioning and taste. Leninade is as unique as finding an Eastern Bloc Olympic athlete not using steroids. Recommended!"

On the bottle cap of a bottle of Leninade, there is a soviet/communism themed pun on the bottom side. This is one of the many appeals and quirks of the drink. 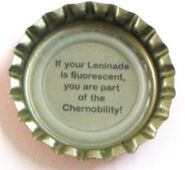 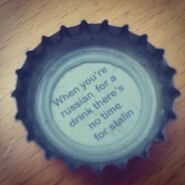 "When you're russian for a drink, there's no time for stalin"
Add a photo to this gallery
Gallery

An empty bottle
Add a photo to this gallery
Retrieved from "https://aj-failure-club.fandom.com/wiki/Leninade?oldid=26579"
Community content is available under CC-BY-SA unless otherwise noted.